Reviews are starting to trickle in for Black Panther (hint: ecstatic), the highly anticipated Marvel film that explores what Africa would have been like if it hadn’t been for the meddling of white colonialists, and nerds on dark corners of the internet are not happy.

Trolls on the white supremacist harassment platform 4chan are now creating waves of threads tackling the question: in a post-Black Panther world, how can we stop blacks people from getting uppity and realizing their true value? Because of course they are.

Threads for the anti-Black awareness campaign appear to have taken off in earnest after actors donned royal attire for the LA premiere, and now attract thousands of participants — popular even by 4chan’s standards (it’s ranked the 180th most popular website in the world).

“It is illegal for US citizens to hold any royal or nobility [sic] titles. Anyone claiming to be a king should be prosecuted,” suggests one user — who is decidedly wrong.

“How can they realize they are of royal descent if they don’t even know who their daddy’s [sic] are,” another ignorant manbaby “joked.”

Another user frantically posted screenshots of lengthy paranoid rants about what a dystopia America would become if Black people were to dominate it. Note that the MPCDot.com website given as a source is a gathering spot for fascists banned for being too racist even for the horrible doxxing and harassment palace SomethingAwful, and bills itself with the homophobic slogan “It’s official! America has AIDS!”

“we [sic] have a big problem on our hands. Soon they will awaken and realize they’ve had mistakel [sic] powers all along and retake their rightful place,” said an american poster, cutting to the chase.

To be fair, not all 4chan users agreed with the operation. One lone voice of reason asked, “Is [Black Panther] just positive stuff about blacks? [If so,] I have zero problems with it.” One has to wonder who this person is and what strange chain of events led them to patronize the worst website in the world.

The operation is generating far too much material for one person to go through, and more is flooding in by the second, so I will end the piece on that note. In fact, the ~30 minutes spent writing and editing this article saw over 500 additional posts in the related threads.

It’s a sick and bizarre phenomenon that’s hard to understand outside the lens of existential fear and insecurity on part of a largely obsolete White America as it goes into that good night of its own making.

All of this because Black people just wanted to go see a movie about African history and celebrate the richness of their descent.

All of this because of — and say it with me — White Fragility.

We want you to write for FEMoid whether you care to put your name on it or not. Always available, forever discreet: [email protected]

[…] didn’t hurt when pasty cave trolls from the active white supremacist cyberterrorism group 4chan came up with “operations” to attack the movie — which, as usual, immediately blew up in their faces (thanks in part to our […]

Leave them to carry on with this unnatural mocking of God and His creation. The entire black race will be shamed in the end for taking revenge in such a manner without honor .mist blacks hate Christ and God ,who is a spirit ,so in the end they shall be a shame unto all nations and a burden that wont be carried anymore .read the word ,its in there . Shameful and without honor . Like unto their father,the lies never stop coming .shameful.no honor

>what Africa would have been like if it hadn’t been for the meddling of white colonialists
Imagine actually believing this.

“The Kangs have arrived, how do we stop black people from realizing they’re of royal descend and starting a spiritual uprising?”

This is an obvious joke. Have you never been on 4chan? WTF

That “joke” initiated an operation to harass and bully african-americans who feel empowered by Hollywood’s first positive portrayal of their people and that’s not a joke.

This article is a joke too I hope you realise.

Also this movie is hardly Hollywood’s first positive portrayal of blacks. If you listen to these liberals, you’d think Black Panther is also the first movie to star blacks!

This is the new marketing technique
>racists/sexists hate this movie/game!
>they’re trying to undermine it!
>you should buy it to spite them!
That was female Ghostbusters
That was Wolfenstein 2: The New Colossus
Now it’s Black Panther 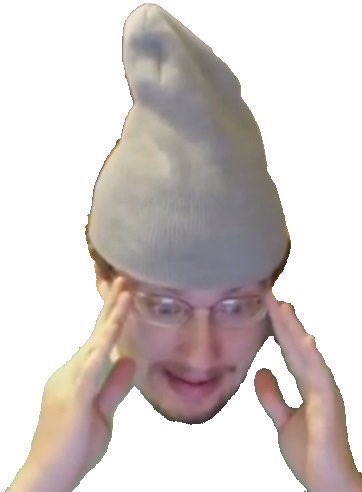 That archive.is link shows there was nothing about black panther or rotten tomatoes posted in the 4chan thread by the way.

Who said there were? Read the story you’re posting on.

The majority of the thread doesn’t call for an operation to prevent black panther either, which is the title of this article.

Meant that the thread doesn’t call for an operation to down vote black panther.

http://archive.is/lbUV1
There’s nothing in here about down voting black panther or rotten tomatoes.

This is how you know the movie will be shit if Disney is already trying to pin negativity on “trolls’. There was never any plan to do this as their official stance is the movie will be good as it promotes a xenophobic ethnostate. Any thread that has ever tried to claim otherwise has been met with disagreement and ousted as shills preemptively trying to excuse bad reviews.

Got some facts to go with that conspiracy theory or are you just winging it Alex Jones style?

This whole article is a conspiracy theory.

Having spent more time than I probably should have browsing the cancerous asshole of the internet known as 4chan I tend to agree with the previous anon. The only two real “plans” to troll the movie that I saw seemed to revolve around trying to convince black people that they could go see it for free and a somewhat half assed attempt to frame the black panther as an anti establishment ethno nationalist. Basically a black version of what a lot of the racially political people there want for white people. Neither seemed to get very far Then shortly after the longer promo started airing suddenly all of the relevant boards got flooded with Black Panther threads. Most of them talking about how the review sights were going to censor racist “I.E negative” reviews. Or how recent racist plots to undermine the movie have been thwarted. To quote that one old dead guy. I think the lady doth protest too much. It all smells a lot like when Fembusters was about to come out and all anyone could do when talking about the movie was piss and moan about haters. This stinks of preemptive damage control from the mediocrity machine. On top of it all it doesn’t even look good. It looks like the fast and the furious guys tried to madlib an action movie out an african national geographics special from 2000 years in the future. Like they looked at black people and thought. OK now if we took away all of the white people stuff and gave them space magic and made one of them black spiderman with claws and invincible armor instead of webs and then we gave him an evil twin marry sue for a villian violla. The Black panther movie. Now make sure to make the CGI looks like hot garbage and just call anyone who notices racist. I can’t help but think this is somewhat how it went down.

This is fake. There was never any effort like this.

Keep in mind media also blamed 4chan when audiences gave the last jedi such a low score. Rotten tomatos had to confirm that it wasnt 4chan at all, but organic ratings.

>This is fake. There was never any effort like this.
There’s something called archives and they’ve been linked.

Which archives show that there’s an operation to down vote black panther?

>The covert plan to tank Black Panther’s Rotten Tomatoes score is not going well
https://www.avclub.com/the-covert-plan-to-tank-black-panthers-rotten-tomatoes-1822665732
>Rotten Tomatoes will block anyone who tries to downvote Black Panther fan score: “We do not condone hate speech”
http://www.indiewire.com/2018/02/rotten-tomatoes-block-black-panther-fan-score-sabotage-1201924400/

Both of these links are about facebook, not 4chan.

Neither of these substantiate your claim.

Sony had a bomb on their hands with the 2016 Ghostbusters and they knew it, they elected to launch a media campaign tossing half their audience under the bus if it would help secure the other half going to the theatre – better to get 50% of ticket sales than darn near 0%. It was a ham-fisted media assault but it still worked somewhat, the movie did not do as well as they wanted but it also did better than their initial fears. A international corporation happily encouraged a rift in our culture to improve their bottom line. I’m not kidding when I say how they promoted Ghostbusters should be treated like a crime against humanity, the damage it caused in gender relations is still ringing.

Disney has elected a more acceptable mass-media target here, attacking men was acceptable but lets face it even the feminist media still has male members who likely didn’t push the agenda as much as they would if they weren’t the target, but attacking the alt-right is 100% guilt-free for these people.

Bottom-line, I doubt BP is going to be a bad-enough movie to need this cover, Disney makes cookie-cutter product but its like mediocre pizza, even if its just so-so its still edible. But what this media blitz does is get into the mind of the white viewer who might’ve simply been uninterested in a BP movie but now are told nazis dont like the movie, giving them a bit more spite-reason to go see it.

Trying with an image this time. 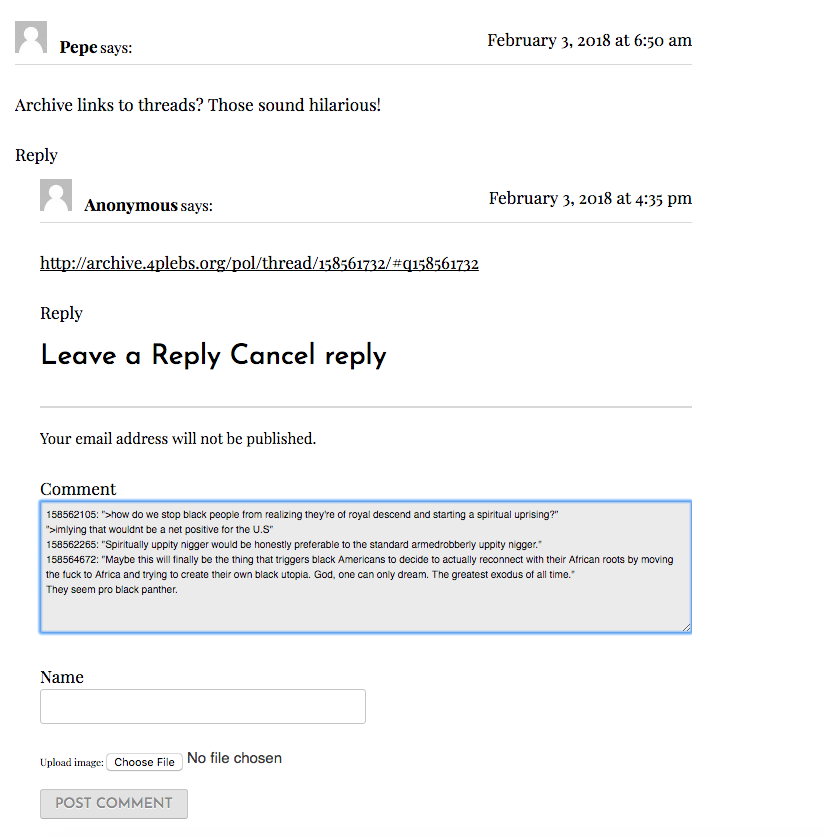 It’s a joke, we wuz kangs is a meme that makes fun of African Americans trying to claim the are descendants from the dynasties of Ancient Egypt. Which is patently absurd of it’s face, kek.
http://knowyourmeme.com/memes/we-wuz-kings

You’ve been trolled, lulz.com my arse.

“We were merely pretending to be retarded”

They cant do shit lol

The actor salaries of course. You are not entitled to free money.